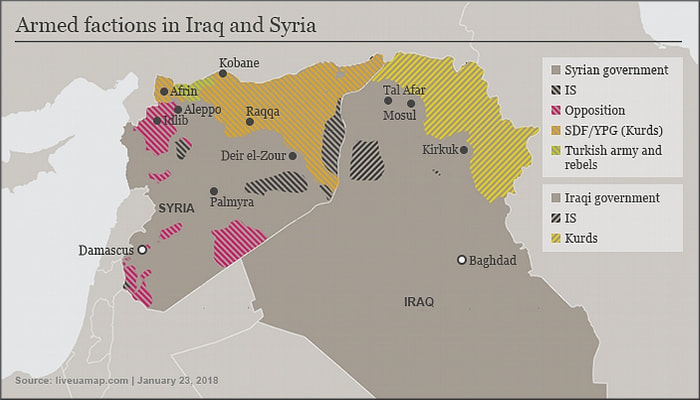 Chase Winter in DW News on 01-29-2018:
" The Obama administration justified US military action against IS on a broad controversial reading of the 2001 AUMF that justified the war in Afghanistan and against 'al-Qaeda, the Taliban, and Associated Forces' — even though IS did not exist at the time of the 2001 AUMF and is a rival of al-Qaeda. [The current] administration has justified continued anti-IS operations in Syria under the same 17-year-old AUMF that the Obama administration used. It has said it has no intention of seeking a new AUMF from Congress.

Retired Air Force Major General Charles Dunlap, now the Executive Director of the Center on Law, Ethics and National Security at Duke University, and " who held the position as deputy judge advocate general for the US Air Force, suggested that Congress has implicitly supported the US military action in Syria by funding it. But he said Congress should still debate a new AUMF. 'In an era of complex terrorism, the president's authority to take action to protect Americans and America's allies ought to be construed broadly. That said, I also believe that a democracy is well served when its elected representatives discuss and debate the wisdom of ongoing military operations, even if not technically required to do so in a particular instance by the Constitution,' he said. "